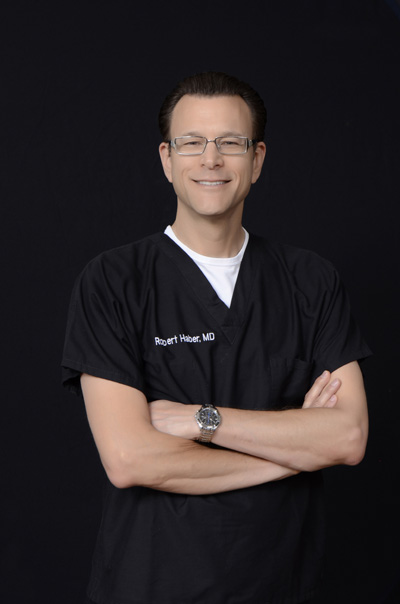 Robert Haber, MD is a Board Certified Dermatologist as well as a Pediatrician, and is a Clinical Associate Professor in the Departments of Dermatology and Pediatrics at CWRU School of Medicine. He treats children and adults, and provides skin care for the entire family. Dr. Haber is considered one of the finest hair transplant surgeons in the world, and lectures internationally each year. He also directs the region’s busiest private clinical trials unit studying new medications.

The International Society of Hair Restoration Surgery (ISHRS) awarded Dr. Haber the coveted Golden Follicle Award in 2009 as one of the world’s top hair transplant surgeons, in recognition of his academic contributions and surgical skills.

Dr. Haber served as Director of Pediatric Dermatology at Rainbow Babies & Children’s Hospital for ten years, and served on the Melanoma and Skin Cancer Committee of the American Academy of Dermatology. He was voted one of Ohio’s Top Doctors by Northern Ohio Live Magazine.

Dr. Haber completed a one year Fellowship in Cosmetic Surgery and Hair Restoration Surgery, and has received numerous awards and honors for his results.

Dr. Haber served as President of the International Society of Hair Restoration Surgery (ISHRS), has authored or edited five textbooks on hair transplant surgery, and has published 12 textbook chapters and over a dozen research articles. He lectures locally and throughout the world on his techniques and performs live surgery internationally.

Dr. Haber has created an advanced office environment, with the latest laser technology and digital imaging, and enjoys displaying his landscape photography.

Dr. Haber has been active in the ISHRS since its founding, and served as President for 2002-2003 as well as Treasurer, on the Executive Committee, Board of Governors, and as Chair or member of over 15 committees. Dr. Haber served a three year term as Co-Editor of the Hair Transplant Forum International, a publication read in over 40 nations around the world. Dr. Haber co-authored the world’s best-selling textbook in the field of hair restoration surgery as well as eight textbook chapters and 16 original reports, and has presented over 100 papers at meetings throughout the world.

Dr. Haber invented the Haber Spreader in 2005, a surgical device designed to improve the quality of donor harvesting and reduce follicular transection. The spreader device has been widely accepted, and is now in use in over 20 countries around the world.

Dr. Haber was honored with the first Award of Excellence granted by the ISHRS, was recognized as Surgeon of the Month by the Hair Transplant Forum International, and selected as Program Chair of ISHRS Annual Meeting held in Barcelona, Spain. Dr. Haber was selected by Northern Ohio Live Magazine as one of Ohio’s Top Doctors, and the Italian Society of Hair Restoration has bestowed five awards on Dr. Haber for his accomplishments. Locally, his techniques and successful results are featured on television as well as in The Plain Dealer.

Dr. Haber has lectured about his surgical techniques nationally in Washington, DC, Nashville, Dallas, Hawaii, New York, Chicago, New Orleans, San Diego, San Francisco, San Diego, Las Vegas, and Orlando, and internationally in Brazil, Canada, Italy, Spain, France, Australia, Germany, Mexico, Malaysia, Switzerland, England, and the UAE. His patients come primarily from the Cleveland area in Ohio, but include patients from a variety of locations elsewhere in the United States, as well as Europe and the Middle East.